I first tried Phirni a few years back while visiting my family in India. Phirni is considered to be a popular dessert, but it was the first time I had ever heard of it! My sister took me to a very upscale restaurant in Delhi and we decided to order Phirni for dessert. When the dessert came out, I was speechless. It looked superb and the presentation was excellent. It was served in an earthen bowl beautifully decorated and garnished with saffron and sliced pistachios. I was reluctant to try it out, but my sister, knowing my love of cooking, insisted I would love it as it is similar to a rice kheer. But instead of using rice grain as you would in rice kheer, in Phirni you use ground rice. The texture was very creamy, similar to a pudding.

I asked the restaurant for the recipe and tried making Phirni several times when I returned to the US. However, I was unable to master the same texture. It tasted fine, but it just wasn’t the experience I had at the restaurant in India. I had fallen in love with this dish and just had to master it! Finally, I figured out that since Phirni is traditionally served in an earthen bowl, the bowl absorbs some of the water, making it more firm (like JELLO). I knew it would be difficult to duplicate so I decided to give the recipe my own twist. I tried adding different fruits with it. It turned out best using peaches. It is very refreshing and great for summer.

I will be posting this recipe soon, so stay tuned! Until then, happy cooking!

Why do I use Sooji (samolina flour)? 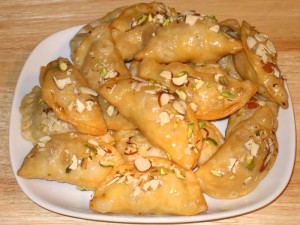 11 thoughts on “Recipe For Peach Phirni (Rice And Peach Pudding)”